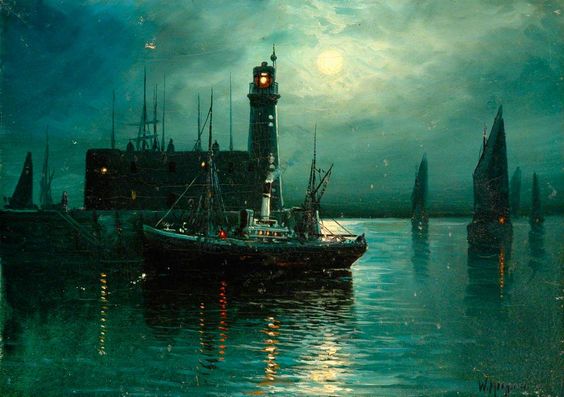 They took a walk along the promenade, retracing their footsteps of that long ago day which in some ways didn’t seem that long ago.

The following preview is of Chapter XVII of INNER MAGNETS, Volume Two of our quantum fiction/magic realism quartet, THE TAMMABUKKU CHRONICLES. In this chapter, the now married protagonists David and Lia begin their honeymoon by going to Scarborough, a town of many memories for them. In this scene, a mysterious girl seems to be stalking them, but are her intentions bad?

The night air became chilly so they returned to the marina and anchored the boat. At the same time, an old fisherman was docking his boat, and he nodded to them. They exchanged a few pleasantries and since the fisherman didn’t have a clue about David’s celebrity, and those were the people David enjoyed speaking with most, they began chatting. The fisherman said that he was a descendant of the family whom the town was named after. “There’s something I want to give to you,” he told them and went on board his boat. David and Lia looked at each other wondering what the old fisherman was up to. Upon returning, he handed David a small Scarborough flag with the family coat of arms. The flag bore a shield, a lion, and three castle towers which closely resembled three chess rooks. They thanked him and then spoke about the ghostly phenomena of the area. David told him about the intangible square shapes they had seen on the horizon. The man looked at David with curiosity and said, “Perhaps they were only for you and your wife to see.” They spoke a few more minutes about Scarborough’s ghosts and the town’s long history before bidding one another goodnight and heading to their car.

As David was opening the car door, Lia again had the sense of being watched. David felt it too, but when they looked around, they saw no one.

When he got in the car, he didn’t start driving immediately. “I don’t see her, but I can feel her, and she doesn’t feel like a fan. Why is she tailing us like this?”

“I don’t know, but I don’t feel anything dark,” she replied and then noticed someone moving between the cars. “Look! There she is—by the Mercedes. She must have been squatting down and stood up for a moment. She’s crouching down again. It’s the same girl in the dark hoodie.”

David hesitated before putting the key in the ignition. “A voice is telling me that we should find out what she wants.”

“It’s telling me the same thing. I think she knows we saw her.”

“Okay then,” he said, starting the car. The girl stood up again but panicked and fell back against the car she was standing next to, and the alarm of that car went off. The girl appeared overwhelmed by the noise and bolted down the road. Lia knew that David could catch up with her in a second, but he didn’t speed up. “I don’t want to add to her trauma,” he explained. “Even from a distance, I recognize that look of dread on her face. I think the noise triggered some kind of an episode.”

They saw a beat-up old Volkswagen Bug pull onto the road with a lurch and take off. “There’s something about her…” Lia whispered.

“Yeah, I feel it too. I think she dropped something over there,” he said, stopping the car. When they got out, they found a pack of tissues and a business card lying near where her VW had been parked. Picking up the card, he said, “It’s for a Nepali café in London named Dhoka.”

Lia looked at the green and gold card. “I don’t think her dropping this was an accident.”

“Well, on her part, it probably was. Something bigger is going on here. Do you know what that word means in Nepali? I know your parents have an affinity for the Nepali-Tibetan culture.”

Shaking her head, she Googled the name. “Doorway—Dhoka means doorway.”

“Look! Our names are on the back of the card!” he exclaimed, showing her, “and not just David Pierson and Lia Bailey, but Daniel Orlov and Cecilia Ley. Our honeymoon information is also here: Grand Hotel, Scarborough, Suite 703. September 7, 2015.”

They looked at one another at a momentary loss for words. “Our honeymoon information wasn’t divulged anywhere. Cecilia Ley’s name was in a few of my blog entries before I removed them, but I never mentioned the name of Daniel Orlov.”

“I know—this is connected to something other than the blog. The restaurant is on Portobello Road and the name of the proprietor is Tika Vidyadhar.”

Lia handed him her phone. “There was a recent article and photo about the restaurant in Metro. It’s dark, but the girl standing by Tika could be the same girl. It says the photo is of Tika Vidyadhar and her daughter, Abigail. Should we call the restaurant?”

“If she shows up again, then yes.”

“Do you think this is connected to the gift from Ambrose?”

She could see something click in his mind when she mentioned Ambrose, but then he dismissed it. “If that’s the case, why would she watch from a distance and then bolt? If she had something to give to us then she’d leave it.”

“Maybe the card is our present,” she shrugged.

“Well, that would be another bend in time since Dhoka wasn’t around in the 1890s—the card says ‘Since 2007’. If we don’t see her again, we’ll swing by this restaurant when we get to London. We’ll be there several days after we return from Russia. Let’s stop talking about this, Shekinah—we’re on our honeymoon.”

The owner of the Mercedes must have finally shown up, as the sound of the car alarm stopped. After David and Lia got into their car, they saw the North Yorkshire police drive by to check the neighborhood.

We're an ageless and timeless mother-daughter writing team who are currently writing a Quantum Fiction quartet entitled THE TAMMABUKKU CHRONICLES. Our names are Deborah Brenner and Kaya Gabsy. If you want to learn more about us, here is our the l author page: https://www.amazon.com/Deborah-Kaya/e/B06XBQH31G View all posts by Deborah Kaya

One thought on “Inis Sui”